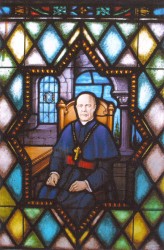 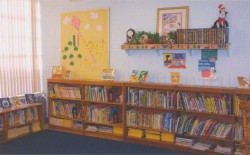 1875. Sent by St. Louis Archbishop Peter Kenrick, the growth of the Catholic community brought approval for a church to be built and dedicated to the Sacred Heart in 1876.

From 1876 until 1885, priests from Arcadia and Doniphan ministered in Poplar Bluff. Fr. Theodore Schmitt was appointed pastor in 1885. Fr. Pius Preiser who, in 1891, began the building of a new and larger wooden church, succeeded him in 1887. As was the custom, the school, staffed by Ursuline Sisters, had been built before the church. It was a two-story building. The downstairs floor, an auditorium, was used for church services until the new church was completed.

Fr. Daniel J. Daly was assigned to Sacred Heart Parish in 1940. By April 1942, the current building was 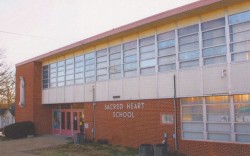 dedicated by Archbishop John Glennon. The church, with its beautiful stained-glass windows, was built at a cost of $60,000. Fr. Daly also established four mission churches in surrounding towns, some of which now have parish status.

A new school was built in 1961. A parish center was completed in 1986. Land has been purchased to enlarge the cemetery and surround it with a beautiful fence. Burials date back to the 1860s, thus making the cemetery older than the parish.