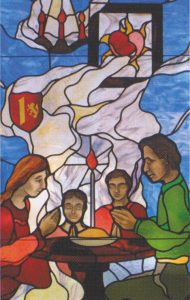 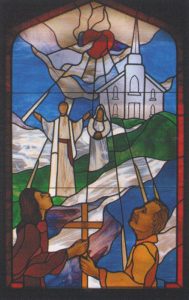 Sacred Heart Parish in Bolivar was founded in 1946. Originally located on Main Street, it was dedicated by Bishop E. O’Hara of Kansas City, MO. During its first year Msgr. C. J. Francka, of Karlin, celebrated Mass there once a month. Thereafter, Fr. W. Curran of Osceola had its Mass twice a month. Then in 1949 Fr. Clem Ilmberger, who had been assigned to be associate of St. Wenceslaus in Karlin, began regularly to have Sunday Mass.

The little church grew over the coming years. Fr. John J. Rynish became pastor. He was followed by Fr. Eugene Deragowski, a native son of Karlin. Ten acres on the west side of Bolivar were purchased and plans began to build a new church with rectory attached. The contract was awarded in November 1957 and was completed and dedicated on August 31, 1958. The Archbishop of Chicago, William D. O’Brien officiated.

Fr. James Seyer was pastor in 1960-61 and in 1961 Fr. Wm. Winkelmann headed the congregation. The following year, quarters for a housekeeper were added, which are presently used as church offices. In 1986 a multipurpose building was built and named McKenna Hall in honor of Fr. James McKenna who served more than ten years as pastor. In 1996 plans were developed for a new rectory which was soon built. In 2004 discussion is underway for building a new church to house a growing congregation.