Sacred Heart Parish traces its history back to 1880 with Masses celebrated in the homes of resident Catholics. 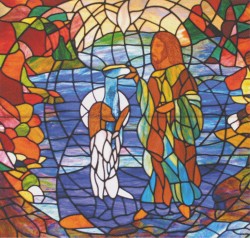 According to parish historian, the late Winnet (Doc) Dent, the priests came on horseback to a small Catholic settlement on the Piney River and continued to Salem. Later, Mass was celebrated on the third floor of the Dent County Courthouse.

A small, white, wood frame church was built on the same property that houses the current church. Mass was celebrated once a month. In 1952 the small congregation built the solid brick and concrete church that is used today. A two-story house was used as a convent for the School Sisters of St. Joseph. The first floor was open to the public for visitors, Sunday School classes, and the like. Eighteen sisters operated the school in the convent, then in a new brick school from 1962 until 1969. As the mining and sewing jobs disappeared, the school was closed. Several sisters remained doing parish work until 1985. 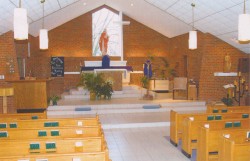 In 1954, the Resurrectionist priests were assigned to Sacred Heart Parish. A mission church in Bunker, Christ the King, was established in 1956. These priests also opened Immaculate Heart of Mary summer chapel (1957) in Joy, St. Jude (1957) in Montauk State Park and another mission, St. John’s Catholic Church (1960) in Licking. In 1969, the Walt Weber family of St. Louis replaced the quonsethut used for a church in Joy with a beautiful handmade log cabin structure near Montauk.

As the church continued to grow, the generosity of the parishioners grew with it. This has enabled the inclusion of classrooms in the basement and handicapped access in all buildings.

The former school building is now the parish hall. The Altar and Rosary women’s group developed a reputation for fried chicken dinners with free meals and a food pantry for the needy. Through this generosity, both Salem and Bunker have much improved worship spaces and gathering areas.