The story of St. Agnes Cathedral Parish is one of growth and development far beyond the dreams of the families

who were its founders. On Aug. 24, 1956, public announcement was made of the creation of the new Diocese of Springfield-Cape Girardeau, with Bishop Charles H. Helmsing, Auxiliary Bishop of St. Louis, as the first bishop. St. Agnes church in Springfield became a co-cathedral with the Church of St. Mary of the Annunciation in Cape Girardeau.

The coming of the Atlantic-Pacific Railroad in the 1870’s to the Springfield area brought Catholic German and Irish workers. Like an arrow of steel, the railroad tracks along Water Street in south-central Springfield pierced the heart of the city. As residential development took place to the south of the city following the turn of the 19th century, the railroad tracks accentuated the division between the north and south of Springfield and became a menace to life and limb. Fearing the danger to school children crossing the tracks, at that time traversed by some 20 passenger trains daily, Catholics of south Springfield decided to establish a school in a house on South and Elm Streets. In 1906, two Sisters of Loretto staffed a school of 35 students. 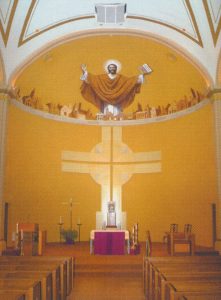 In 1908, 100 Springfield Catholics wrote the Bishop of the Diocese of Kansas City the following: “The earth does move,” said Galileo. “The world is round,” said Columbus. Springfield will be yet a great city, and the Catholic Church should grow with it!”

Bishop Hogan of Kansas City was impressed by the convictions of the Springfield Catholics from the south part of the city. He gave his permission to build a new church known as St. Agnes. The cost was $27,850. The parish started with an active membership just under 300. On Thanksgiving Day, Nov. 24, 1910, the church was dedicated.