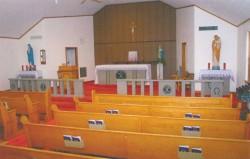 the Atlantic and Pacific Railroad in 1871. Prior to this time, a Jesuit priest, Fr. John Schoensetter, SJ, ministered to two Catholic families, celebrating Mass in one of their homes every six months as he rode the circuit to Indian tribes and neighboring missions in Kansas and Missouri from his base at the Osage Mission, now St. Paul, KS. His successor served the area for only a few months before he was killed riding on a handrail, his means of travel from mission to mission.

Fr. Graham of Springfield came to the Catholic community in Sarcoxie Prairie which was growing due to the influx of German and Irish settlers. He collected enough funds to build a simple wooden church that was floored only half way. This side was reserved for the women’s use. The side with native soil was assigned to the men.

Missionary priests continued to minister to the Catholic community until 1879. Although the parish was in the Kansas City Diocese, a St. Louis priest, Fr. Angenendt, became the first resident pastor. He built a rectory. However, judging by parish sacramental records he also ministered to Catholic communities in Carthage, Neosho, Lamar, and Nevada.

A new wooden frame church for St. Agnes was built in 1900. Ongoing growth of the Catholic community caused a mission church (St. Michael) to be built in Wentworth in 1905. In 1942 a fire destroyed St. Agnes Church and rectory. A new church was built on the same tract of land. Except for a building supervisor and foreman, all the work was donated. Even the children helped by filling the cracks in the flooring. The cornerstone was laid and blessed in January 1943. The generosity of past parishioners has made possible the continued maintenance of a grotto and a parish cemetery which are adjacent to the church. They can be easily visited and cared for by the parishioners.

Much has been said about the structural changes of the parish; however, these accomplishments were made possible through continual spiritual guidance from the priests who so faithfully served “the church on the prairie.”