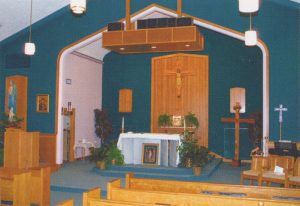 The city of Chaffee, MO, was founded in 1905. A few staunch Catholics were among the first settlers. In 1906 they petitioned Archbishop Glennon of St. Louis for a resident priest. On the feast of the Holy Family in 1907, Fr. Frank Feeley, CM, celebrated Mass for the first time in Byrds Hall, the only place large enough to substitute for a church. After that, Vincentian priests traveled on horseback once a month from Cape Girardeau to care for the spiritual needs of the Catholics in Chaffee.

In the summer of 1907, Archbishop Glennon appointed Fr. Anthony H. Rohling first resident pastor. Since there was neither a church nor a rectory, the pastor volunteered his services as spiritual director for the hospital sisters in Cape Girardeau. To compensate, the sisters provided room and board.

The building of St. Ambrose Church materialized in November 1907. Mass was celebrated in the new frame building on Jan. 1, 1908.

Succeeding Fr. Rohling as pastor, Fr. Michael J. Clooney established St. Ambrose School. It was staffed by the Sisters of Mercy of St. Louis through 1971.

The success of the school antagonized the Ku Klux Klan. Fr. John J. Lonnergan, pastor at that time, seized every opportunity to counteract the effects of the Klan. He was so courageous and convincing during his attempts to inject Christian principles into public life that the Klan’s most ardent advocates severed their connections and the organization disbanded.

The church was destroyed by fire on April 12, 1942. Within a war and postwar period, the best that could be done was to convert the school basement into a temporary church. Twelve years later, in 1953, Archbishop Joseph Ritter granted permission for the building of a new church, which was completed on May 30, 1954, and dedicated on July 4, 1954.

For current parish Mass times and other activities and events click HERE. Or, call the phone number listed. 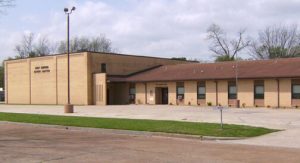