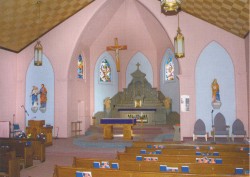 The founding date of St. Ann, 1872, commemorates the time when the first Mass was celebrated in Carthage. St. Ann’s did not become a truly established parish until the Kansas City Diocese came into being in 1880. Before that Catholics in Carthage were, for the most part, railroad workers building the Missouri Pacific Railroad. They were visited by priests from Springfield, Pierce City, and Sarcoxie every two months or so. Mass would be celebrated in either Casey’s Confectionery, Reagan’s Hall, or the court house. Offertory collections made the purchase of two lots possible. These would eventually become the site of the church.

In 1881, the laying of a foundation for the first church began. Although the interior was not fully completed, the first Mass was celebrated in the frame structure on April 2, 1882. In addition to serving the Carthage Catholic community, the pastor also ministered to Catholics living in Lamar and Nevada. When those two communities were made into self-sustaining parishes, Webb City came under the care of the Carthage pastor. There was an attempt to start a school in 1890, staffed by the Sisters of Mercy. However, it closed in 1891.

From 1893 to 1895, Carthage was without a resident pastor. Mass was celebrated every other week by the pastor

from Sarcoxie, who was a Benedictine priest from Conception Abbey. A succession of resident pastors followed, although there were still brief periods without a pastor. The present church was built of Carthage stone in 1908.

In 1962, with the encouragement of Bishop Charles Helmsing, a school began to materialize. Ground was broken in February. The Sisters of the Most Precious Blood from O’Fallon, MO, agreed to staff the school, which was blessed by Bishop Ignatius Strecker, second bishop of the diocese, on Sept. 16, 1962. In 1971, the Sisters withdrew to be replaced by lay faculty. 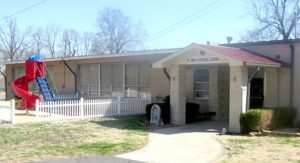