The town of Glennon originated in 1905 when St. Louis Archbishop John J. Glennon granted permission to 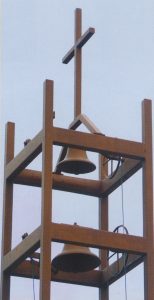 farmers in the southeast part of Bollinger county to establish a Catholic parish. The first pastors lived in Glennon and also served the parish in Advance. The first church was destroyed by a tornado on May 30, 1917, but rebuilt by November.

In 1918, the pastor moved his residence to Advance and served both communities. Because of the difficulties getting across what was then a swamp, Masses in Glennon were celebrated monthly. In 1920 a full-time pastor was appointed.

Shortly after the Glennon School District was consolidated with the Leopold School District, all Glennon students were bussed to Leopold. The children in the St. Anthony Mission Church community participate in religious instruction two mornings and attend Mass before classes the other days. In 1933 a larger building replaced the former school building, which had been used as a hall.

The Parish Council of Catholic Women and Knights of Columbus are the leadership organizations, but all parishioners take part when needed. The monthly food collections for the Bollinger County Food Pantry and Christmas gifts for Birthright are just two of the many activities that allow the tiny community that named a town to display its Catholic faith proudly.