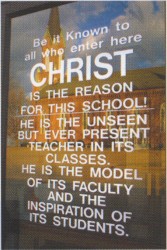 increasingly difficult to attend Mass at surrounding parishes and hoped to establish a parish of their own. Fr. Sosthenes Kleiser, pastor of St. Mary’s Church, Cape Girardeau suggested, that they first open a Catholic school. The church would follow. He recommended a teacher and the school was opened in the fall of 1877.

In the spring of 1878, 31 families met with Fr. Kleiser to discuss the possibility of building a church. The building was completed in six months and Fr. Kleiser became the first pastor. The first Mass was celebrated with Fr. Kleiser on Nov. 3, 1878.

Fr. Kleiser stayed on as a beloved pastor until August 1882 when Fr. A. J, Kleinschnittger, or Fr. Klein as he came to be known, was assigned as the new pastor. The congregation soon outgrew the small wood frame church. On April 23, 1889, the parishioners built a new church. It had been designed by Br. Adrian, OSF, a renowned St. Louis architect.

On Aug. 28, 1890, the feast of St. Augustine, parishioners traveled in wagons to take part in the dedication of the new church. Vicar General Brady dedicated the new church, naming St. Augustine as its patron saint. The church was remodeled in September 1948. Then, on June 27, 1979, work began on the restoration of the church to its original design with a few modern changes. Seven months later, the parish family again gathered for a rededication ceremony. Over the years the parish has undergone many changes, including the addition of other buildings and the coming and going of many talented and dedicated pastors. The faithful devotion of the parishioners of St. Augustine Parish has remained constant. Today, the parish is home to more than 440 families.