Two historic events marked the beginning of the Catholic parish in Neosho: the donation of land for a church 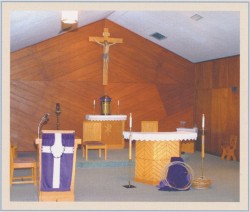 site and the arrival of Catholic immigrants from Ireland, Germany, Switzerland, and the eastern US.

In 1871 the Atlantic and Pacific Railway deeded a half-block of ground to Archbishop Peter R. Kenrick of St. Louis. It crowned the hilltop on South Wood and Hill Streets, overlooking Neosho. The mission at Neosho and other southwest Missouri missions were served infrequently by two missionary priests with headquarters in Pierce City, Fr. Henry Hugh O’Reilly in 1876, and Fr. John Hennes in 1878, who had to journey long distances by foot, horseback, or carriage to celebrate Mass.

In 1876, the dream of building a church began to take tangible form with the excavation for the church foundation. Native stone was prepared and laid by the pioneer Catholics. However, by the time the foundation was completed, the church funds were exhausted and construction work had to be suspended.

By 1880, a building fund of a few hundred dollars was raised. In December of 1883 construction of the church was carried out under the direction of Fr. Dennis Kelly of Sarcoxie Prairie. The 30- by 50-foot building was completed in 1884 with a cost of $800. In the meantime, boards on nail kegs served as pews. A few months later, altars, pews, and a choir loft were added. The parish numbered 125 at this time.

In 1885, Fr. James Wood was appointed first resident priest, and during his residency the interior church furnishings were completed. That same year the Seneca mission, now a parish, was attached to the Neosho parish with Fr. Wood as missionary priest. On May 23, 1889, Bishop John Hogan, first bishop of the Diocese of Kansas City, dedicated the church and named it after a sixth-century Irish saint.