Mass was first celebrated in a private home in Piedmont, MO, by Fr. John Hennesey who traveled south on 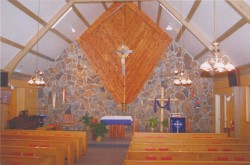 horseback from Iron Mountain, a distance of about 50 miles. For the most part, the Catholic community consisted of Irish and Welsh immigrants who worked in the granite quarries.

In 1900 the pastor from Poplar Bluff celebrated Mass in private homes until 1911. In 1938 talks by two priests from Kenrick Seminary in St. Louis on Catholicism resulted in the celebration of monthly Masses by Vincentian priests traveling on horseback from Perryville. The private home used for worship was named St. Ann’s Chapel.

Vincentian priests with the Motor Missions arrived in Piedmont in June 1940 and provided daily Mass. The expanding ministry caused mission churches in Williamsville and Van Buren to be built. Greater use of automobiles brought diocesan priests from Poplar Bluff involved in the Missionary Apostolate Plan. A new chapel was built and dedicated to St. Catherine of Siena. A full-size church was built in 1957.

In 1962, with phasing out of the Missionary Apostolate Plan, a full-time pastor was appointed for Piedmont and its mission churches. In 1969, Chicago Servite priests were assigned to the parish. Then in 1977, diocesan priests once again served the parish and missions.

During the 1982 floods in the eastern portions of the diocese, parishioners offered shelter to residents of the town as the waters rose. Today, the granite quarries are gone, but the Catholic community remains active in sharing their faith and parish resources with those in need.