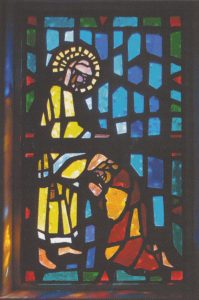 St. Cecilia Parish was founded as a mission church in 1923, although as early as 1918 services were held in the homes of Martin and Alvina Menz and Leonard Stokes. In June 1923, property was purchased at the corner of High School Blvd. and Electric Street. In the 1930s a frame church was built with a $500 grant from the Catholic Church Extension Society. In the 1940s Fr. Lyons, St. Cecilia’s pastor, also ministered to the German and Italian prisoners of war in the area.

Property was purchased at College St. and North By-Pass. Archbishop Joseph Ritter celebrated the groundbreaking for a new church and rectory in October 1952. The dedication took place on Dec. 6, 1953. The Victory Knoll Sisters arrived during this time to begin their ministry in Kennett and the Bootheel. At the time there were 15 families in the parish. In the 1960s the parish grew from 32 to 200 members.

The Victory Knoll Sisters left the area and the convent became the priest’s residence. The former rectory building housed the parish center. The Sisters of Charity of the Blessed Virgin Mary, including Sr. Mary Frances Reis, arrived in the area in the 1980s and assisted in outreach programs that continue in the community today.

In Aug. 1992, a Parish Building Renovation Project began. It included the addition of stainedglass windows, a unified entrance and a new sanctuary at the west end of the church. Bishop John Leibrecht dedicated the completed facility on April 2, 1993. In December 1996, outreach to the Hispanic community was inaugurated with celebration of the Feast of Our Lady of Guadalupe. In 1999 the parish was twinned with St. Eustachius in Portageville.

In June of 2003, the parish celebrated its 80th anniversary.