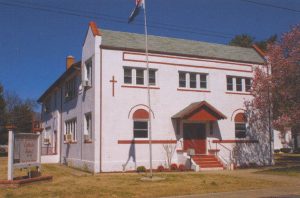 In 1899 Fr. James Furlong traveled regularly from Immaculate Conception Parish in New Madrid to Portageville to celebrate Mass in several homes. The first church was dedicated on Nov. 23, 1902, on ground donated by Eustace DeLisle. The parish was named St. Eustace after the Christian name of Mr. DeLisle. Fr. C. J. Kane was appointed its first pastor.

In 1904 Fr. Joseph McMahon became pastor and supervised moving the church to its present location.

At the insistence of Fr. William Galvin, who arrived in 1920, the parish’s name was changed to St. Eustachius, a 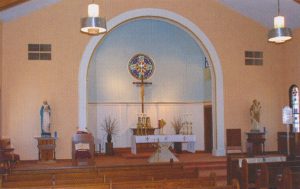 Latinized form of its previous name. Fr. Galvin supervised rebuilding the church and the rectory in Spanish architectural style following a disastrous fire in 1923.

Fr. Bernard O’Flynn became pastor in 1929, followed in 1940 by Fr. Harry Lambert. In 1941 Fr. Sidney Stocking began his 16 years of service as pastor in a parish that had numbered about 160 families prior to World War II.

Mr. and Mrs. Guy DeLisle erected the grotto of Our Lady of Fatima in 1955.

The parish was twinned with St. Cecilia, Kennett in 1999.