The history of the Catholic Church in Sikeston, MO, began in 1885 with the visit of Fr. Joseph Connolly, Pastor of Immaculate Conception in New Madrid, MO. Although the Catholics numbered only 10, their enthusiasm for his visit led him to travel to Sikeston once a month to celebrate Mass in one of their homes. In 1887, construction began on a small chapel, but a tornado demolished the almost finished building. Homes again served for worship with priests from Poplar Bluff and Charleston taking turns celebrating monthly Mass.

In 1891, the Methodist congregation had outgrown their little church, which the tiny Catholic community bought. In 1892, Archbishop John J. Kain from St. Louis traveled to Sikeston to dedicate the church to St. Francis Xavier. It was not until 1905 that a resident pastor, Fr. Conrad A. Brockmeier, arrived in Sikeston. It was necessary for him to board in a private home. He quickly devised the means to build a rectory, which was completed in December 1905.

The parish school opened in 1921. Three Sisters of Mercy taught 50 students. In 1930, a large home was purchased for a school and convent. That residence is now the rectory. Today’s brick church was built in 1938. A steady increase in the school population caused a new school and convent to be built in 1951. A Parish Center, with a gymnasium, meeting room, kitchen, and offices was constructed in 1991 and dedicated March 1, 1992.

In May 1970 the Sisters of Mercy were transferred and the school was closed, to be reopened in 1987. The enrollment has since grown and is a source of pride to the parishioners. The 2004 enrollment was 168 students with 14 lay teachers.

The parish, in 2004, consists of approximately 1,500 people. Under the patronage of St. Francis Xavier, the congregation hopes to continue to grow in years to come. 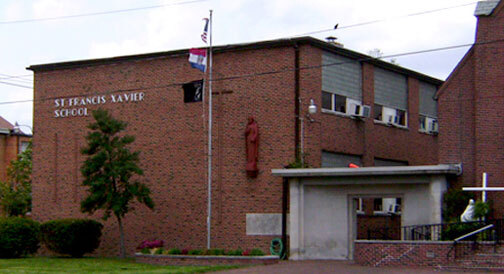