In 1837 Fr. John B. Taritori, a Vincentian from Perryville, acquired 154 acres of land in

Texas Bend as a site for a Catholic church and cemetery in Tywappity Bottoms. The little church was dedicated on Sept. 15, 1839, under the patronage of St. Francis de Sales. As immigrants mainly from Germany arrived, a larger, frame church was constructed in Charleston and dedicated to St. Henry in 1873, replacing St. Francis. The pastor also attended the needs of Catholics in eight surrounding cities as far west as Poplar Bluff, often celebrating Mass in private homes until 1905 when a larger church was dedicated.

A school was begun in 1888 with an enrollment of 35 pupils. In 1890, Ursuline Sisters from St. Louis taught there until a larger school, named Charleston Convent School, opened Sept. 12, 1892. In 1920 the Ursulines added a two-year high school curriculum, only to be replaced in 1922 by three lay teachers. In 1926 the Sisters of the Most Precious Blood of O’Fallon, MO, took over the school with 167 students. 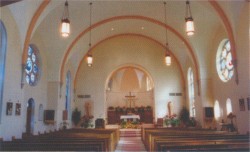 Extensive structural repairs were made to the church and the Old Convent School in 1948. Two years later, a new parish, dedicated to St. Maria Goretti, was founded in East Prairie, and in 1953, the high school was completely renovated and a new elementary school built. Two years after that, the church interior was gutted and thoroughly renovated. Eventually dwindling enrollment and financial and academic limitations closed the high school, which had graduated 354 students between 1937 and 1969. In 1976 St. Maria Garetti parishioners merged with St. Henry’s parish and the little church in East Prairie was closed.

Lay involvement and leadership has been encouraged and maintained from the parish’s early beginnings up to the present day.