Twelve Catholic families and their pastor, Fr. John van Luytelaar, migrated to what was then known as 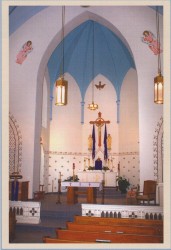 Vinemount in southeast Missouri. Catholic Germans and Hollanders living in the community were Catholic, but until the arrival of the newcomers, attended Mass only infrequently because the nearest church was in Cape Girardeau. After Fr. Luytelaar’s arrival, on Aug. 15, 1856, work began on a two-room log structure where the pastor would live and celebrate Mass. Construction of a frame church began in 1858.

The Civil War Years obscured the history of the community. The parish was completely scattered. In 1866, Fr. John Bertens built a rectory and repaired the church for new immigrants. A log schoolhouse was added in 1872. A Dutchman, he studied German in Illinois to deliver sermons in both languages.

On Aug. 16, 1878, Fr. Francis Bettels arrived from St. Henry in Charleston and built a middle school the following year, followed by a frame schoolhouse in 1894. The growth of the community caused a request for a post office in 1894. The people named their postal address Leopolis in honor of the Pope at that time, Leo XXIII. The name was rejected by the postal authorities, but Leopold was submitted and accepted. In 1890, the first parish picnic had 150 parishioners in attendance. Today more than 2,000 people participate in the annual event.

The parish school was turned over to the State of Missouri in 1960. Further school additions have been tax funded and state aid supported and are state owned. Catholic students receive religious instruction from volunteers or attend Mass before each school day begins.

The Parish Council of Catholic Women (St. Anne Sodality) and St. Isidore Knights of Columbus Council #5893 are organizations that do much to support the parish in its spiritual life and outreach to the community at large.