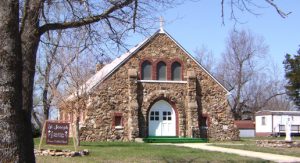 Catholic German families in Starkenburg and Rhineland, MO, left in 1872 to begin new homesteads out West. During their journey in covered wagons, sickness broke out. Having completed almost 200 miles of the trip, the pioneers decided to stay where they were in the community of Peace Valley, also known as White Church. The latter name came about because of a white Methodist church considered a landmark on the wagon trail blazed by early settlers and merchants who traveled the trail from Rolla to West Plains.

In 1895 Fr. John Waelterman was assigned as the first resident pastor. The tiny Catholic community grew. Eventually a parochial boarding school was built, staffed by Ursuline nuns. Students came from Willow Springs, Mountain View, Cabool, Thayer, Dallas, Texas, and Corsicana, TX. The school closed in 1907, but was rebuilt and reopened, staffed by Daughters of Charity in 1937. As the population shifted to Mountain View and West Plains, the school closed in 1956.

A mission center and the “Mother Church” for many of the parishes in the south central area of the Diocese of Springfield-Cape Girardeau, St. Joseph Mission Church stands as a proud reminder of the presence and growth of the Catholic community.