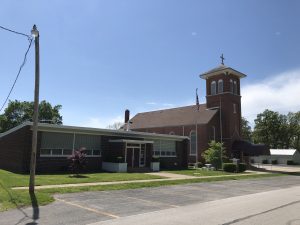 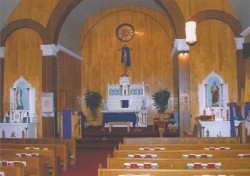 A priest visited Billings for the first time in 1879 when Mass was celebrated in the Vogelteich home. It wasn’t until 1883 that Billings was visited by a priest again. Mass was offered in a store operated by William Wolfe. It was at this time that the priest urged the people to build a church. The task was completed within the same year. It was built on two lots donated by the Frisco Railroad. The original structure was made of lumber hauled by men from Stone County and cost $250.00.

Although a new brick church was erected in 1890, it wasn’t until 1909 that it was dedicated. The original wooden structure was remodeled and used for the parish school. The building was destroyed by fire on Nov. 2, 1920. The present church was built the following year and dedicated on May 4, 1921. In February 1942, the men of the parish dug a basement to serve as a recreational hall. The present day stained-glass windows were put into place during the spring of 1947.

In 1951 a new brick school building was built. Classes began on Nov. 26, 1951, and continued until 1967 when the last class graduated. In 1980, an addition was added to accommodate the growing number of students in the Parish School of Religion.

The first parish rectory was built in 1901. It served as a residence for the priests until 1972 when it was sold and moved. The parish priest moved into the convent, which had been vacated when the school closed and the sisters left. This remained the residence of the priest until the spring of 2001 when the parish purchased a home at 414 Griesemer Road.

In 1999, several men of the parish erected a metal building to serve as the St. Vincent de Paul distribution center. To date, the parish owns and maintains the church, the annex building, the parish hall, the cemetery, the storage and pantry building, and the present rectory.