St. Joseph Parish in Springfield was founded in 1892 “for the faithful of German origin and nationality living in Springfield and North Springfield and their suburbs.” So read the decree of Bishop John J. Hogan of Kansas City as he placed the parish in the care of the Benedictine monks of Conception Abbey who still staff the parish, which now serves a diverse Catholic community.

A donation of a house and lot from Mr. Charles Heer provided the first site for a church and school. The school opened in 1893 and has remained open until the present time, first staffed by the Sisters of Mercy from St. John Hospital and then by lay teachers. The school is presently part of the Springfield Catholic School System.

The parish outgrew its original buildings located at Chestnut and Jefferson Streets and the church and school were moved to its present location at Campbell and Scott Streets. The cornerstone of the new church was laid on June 4, 1905. The parishioners did much of the work in constructing the present church which was dedicated on Thanksgiving Day, 1906. A new school building was opened in 1908 and served until 1950 when it was replaced by a modern school structure, which was expanded in 1955. 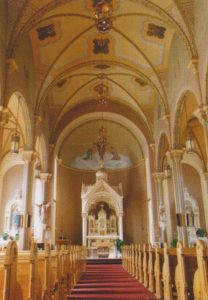 The parish has grown from 75 families in 1904 to its present size of 350 families, many of whom live in various parts of the city and county. In the last few years, extensive refurbishing of the church has made it a beautiful place of worship with excellent acoustics. A gathering space was constructed in 2001 and new church doors were added in 2003. Many young couples seek to be married in the church because of its distinctive traditional beauty.

The parish is currently known for its emphasis on community among its parishioners, its generosity to the poor and its beautiful liturgies, all in the Benedictine tradition. Fr. Denis Dougherty, OSB, the present pastor [as of this writing—2005], is the 49th Benedictine priest from Conception Abbey to serve the parish in its 112 years of existence. 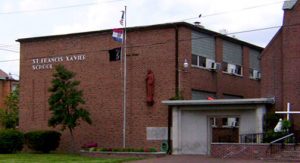