For current parish Mass times and other activities and events click HERE. Or, call the phone number above 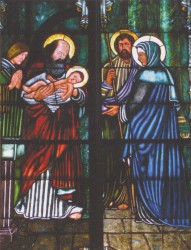 Lead and zinc mining along with railroad expansion drew German, Irish, and French immigrants to the growing town of Joplin in the last half of the 1800s. Formally incorporated on March 23, 1873, the city was named after a Methodist minister, the Rev. Harry G. Joplin, who was among the first to come to the area.

In 1877, with permission from St. Louis Archbishop Peter Kenrick, a small brick building was constructed to provide worship space for the 20 to 25 Catholics settlers. The first Catholic school in Joplin was opened in 1882. In 1885, at the invitation of Bishop John J. Hogan of Kansas City, the Sisters of Mercy of Louisville, KY, came to staff the school. The nuns acquired a home a block south of the present church to serve both as a convent and a school, the Academy of Mercy. In 1900 the sisters built and staffed St. John’s Hospital, which replaced a smaller hospital, Mercy Hospital, which had begun operation in 1896.

The parish opened St. Peter Elementary School in 1924 in a building that is now St. Peter middle school. In 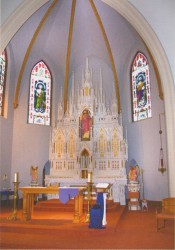 1935, a four year institution, St. Peter High School, replaced the Academy of Mercy in the convent building. In 1948, a two-story building was constructed south of the convent to house the high school. An auditorium-gymnasium was added one year later and the name was changed to McAuley Catholic High School.

Younger families have moved into the parish and, after becoming acquainted with St. Peter’s rich history, have added another level of vibrancy and activity to the parish community. Outreach House Ministries provides services to the poor and marginalized. Just this example of community witness has resulted in people being their church today, but they also remember their past, as the first Catholic community in Joplin, they look with hope and confidence to the future. 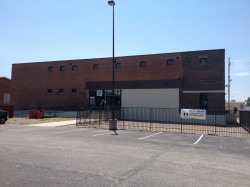