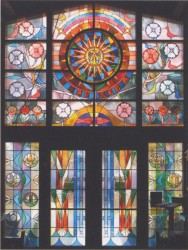 The roots of the parish family in Ironton began in 1870 when the St. Louis Diocese established Immaculate Conception parish in Iron Mountain to serve the miners in an area formerly served from Fredericktown. Fr. John J. Hennessy ministered to all the towns along the Missouri-Pacific line from Farmington to Doniphan. Eventually, a church was built in Graniteville. In 1877 the Ursuline Sisters acquired the Methodist College in Arcadia. In 1878 the parish of St. Joseph was established at the Ursuline Academy with Pilot Knob’s Our Lady Help of Christians as its mission. The missions at Bismarck and Graniteville joined St. Joseph in 1890 when Immaculate Conception in Iron Mountain closed.

Calvary Cemetery became part of the parish in 1880. In 1909 the “Big Chapel” was built at the Academy with help from the parish and served as the parish church until 1955.

The Servite Fathers came to staff St. Joseph’s and its missions in 1951 and began moving the parish church to its present location. They acquired land and a small house just outside Ellington in 1952 and converted it to St. Anne mission. On Easter Sunday, 1958, the first Mass was celebrated at Ste. Marie du Lac Parish Church. A parish school was built in 1963 and opened in 1965 when the sisters at the Academy closed their grade school. The school proved to be a financial burden however, and closed in 1971.

In 1956 Ste. Marie du Lac and its missions (except Bismarck) became part of the Springfield-Cape Girardeau 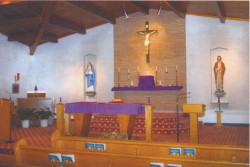 Diocese. The Servites opened mission churches in Lesterville in 1957 and Viburnum in 1966. In 1980 a new rectory was built. In 1985, after being served from Piedmont for a few years, the Ellington mission church was closed due to the declining Catholic population. In 1991 the Servite ministry ended with the retirement of Fr. Anthony Gaydos who became senior priest in residence. Diocesan clergy returned to the parish in the person of Fr. James Unterreiner.

In its 135 years of existence the parish has seen many changes and shared the ups and downs of the local economy. The train no longer stops; the mines that brought so many are closed in Iron Mountain and Arcadia Valley and are struggling in Viburnum. Lesterville is a small parish that still serves tourists and weekend residents. Graniteville and Ellington were closed as their Catholic populations decreased. However, the faith is still strong and Eucharist is celebrated and the tradition is being preserved and handed on to the future. There is a strong St. Vincent de Paul Society in Ironton and one beginning in Lesterville. There is good cooperation with other denominations in serving those in need in all three faith communities. Bonds are being forged with other parishes in the region to make best use of our resources in the new century.