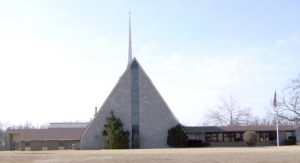 In the late 19th century, local mining prosperity attracted Catholics to Aurora. To attend Mass, they had to travel by horseback or carriage to either Verona or Billings. This led them to petition Kansas City’s Bishop John J. Hogan to start a parish. The first Masses were held in the City Hall by visiting Benedictine priests from Conception Abbey.

The first resident pastor, Fr. William Burke, came in 1896. Ten years later, Holy Trinity Church was built at the corner of College and Lincoln in 1906. A one-ton church bell, the tone of which was enhanced by the addition of 30 silver dollars, announced the presence of the new Catholic Church.

Fire engulfed the interior of the church on Nov. 13, 1915, which was subsequently restored and improved. With parish growth, a new rectory was added in 1916 and, in the late 1960s, a school of religion for those unable to attend Sacred Heart Catholic School in Verona. Gradually the site was no longer adequate for the parish’s needs.

Land at Carnation Road and Highway 60 was donated in 1979 for a new parish complex. The dedication of the new church and rectory took place on the feast of the Holy Trinity, June 1, 1980. Stained glass windows from the old church were included in the new. Parishioners built the altar and lectern from native stone. In the early 1990’s a bell tower was added to house the bell from the old church. A covered entryway to the church, a new wing with classrooms, hall and kitchenette were added. In 1996 a building housing a gym and large kitchen was built.

Because of the shortage of priests, since 1988 one pastor has served both Holy Trinity and Sacred Heart, Verona. In 2000, the parish started a new era with a parish life coordinator and a canonical pastor.