The opportunity to celebrate Mass in the late 19th century occurred only two or three times a year, yet the tiny 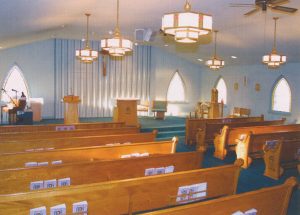 Catholic community in Mountain Grove, MO, continued to grow. The first church was built in 1894. Mass could now be celebrated once a month by Benedictine priests who traveled from Conception Abbey to accommodate the increase in the number of Catholic families. In 1899, a small house on Elm Street was purchased to be used as a church.

In 1940 Kansas City Bishop Edwin V. O’Hara appointed a resident priest. In 1952, the bishop approved the building of a new church. The Extension Society furnished $5,000 for land and materials. The parish had members experienced in almost all phases of construction and the tools and equipment to perform the labor. Each family generously donated 500 hours of labor. In 1956, when the Diocese of Springfield-Cape Girardeau was formed, Sacred Heart, which had been in the Kansas City Diocese, became the “Mother Church” for St. Michael in Cabool, which had been in the St. Louis Archdiocese.

The church was renovated in 1997. The anti Catholic sentiment so noticeable in the past has now diminished through the witness of the faith-filled parishioners. The priest shortage has left Sacred Heart without a resident pastor. A priest from Springfield now serves the parishioners’ spiritual needs. A Parish Life Coordinator and parishioners who go out of their way to help in any way they can take care of the everyday running of the parish