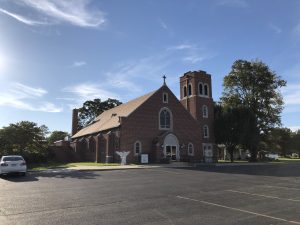 OH ($40.00 an acre) and travel the Ohio River by way of Cairo, IL, then up the Mississippi toward Commerce, MO. Most of this first group of pioneers originally came to America from Schirrhine, a village in Alsace, Lorraine. Trouble on the boat caused them to land and settle in Tywappity Bottoms, now called Texas Bend.

In 1839, a log church was built and dedicated to St. Francis de Sales. Outbreaks of malaria caused the settlement to seek a warmer, healthier climate. In 1841, the first group to leave settled near Benton. A donation of land enabled the community to again construct a log church in Benton near what is now highway 61.

Vincentian priests attended to the spiritual needs of the people even while the small Catholic community endured anti-Catholic sentiment. In 1845 the church was set on fire and burned to the ground by what was known as “The Know Nothing Spirit.” However, even before this event, the increasing population in Benton caused many to move farther west to the present site of New Hamburg. As that population grew, a church was built. Those who remained in Benton now had a distance of 10 or more miles to travel by horse and buggy to Mass.

In 1899, Frank L. Diebold willed six acres of land to the Benton Catholic community. This gift, augmented by a donation of $1,000 by Denis Diebold, enabled them to build a church that was dedicated to St. Dionysius (Denis) in 1904. A laywoman, Barbara Schumacher, conducted a school for 15 pupils until the Sisters of St. Francis of Mary Immaculate came in 1909. School enrollment grew to more than 100 students and has currently leveled out to the current enrollment of 80 students.