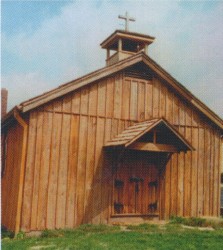 The first people to settle in New Hamburg came from the Alsace-Lorraine area of Europe, between France and Germany. They left their homeland because of religious persecution caused by the French Revolution and Napoleonic Wars. They stopped first at Massilon, OH, where land prices of $50.00 an acre forced them to settle elsewhere. They sailed down the Ohio River and up the Mississippi River to a place called Texas Bend where they could purchase land for $1.25 an acre. When a malaria epidemic forced them to leave, they settled in the Benton area but were soon forced out by religious persecution. Masses were celebrated in private homes until 1847 when a donation of land enabled the Catholic community to build a log church, dedicated to the Blessed Virgin Mary. From 1869-1904, the log church was also used to house a parochial grade school.

The current church building was begun in 1853 and dedicated in 1859. The design was based on the memory of 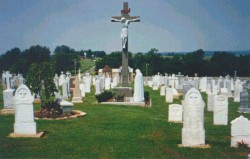 a church in Schirrhein, Germany. In 1858 the church was named St. Lawrence in honor of the patron saint of the son of Wendolin Bucher, who donated the land.

On May 10, 1864, Confederates burned the church and other buildings and records of the church were lost. It was rebuilt after the Civil War. In 1871, Catholics in the community of Kelso formed their own parish, as did Catholics in Benton and Oran in 1904. Chaffee Catholics formed a parish in 1907. New Hamburg is considered the “Mother Church” for Scott County and still occupies the central geographic position of these five Catholic Churches.

The church has undergone several renovations, the most extensive in 1994. The Parish Center, built in 1988, provides space for multiple events for the parish and community at large.

Through the hardships of the founding fathers, the stability and growth of the St. Lawrence Catholic community are founded on its faith in God and one another.